The Major Outcomes of the 2019 NUS National Conference 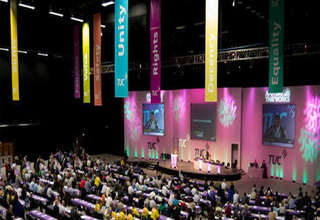 Last week saw the NUS national conference take place in the SEC Armadillo in Glasgow. Here is a brief summary of the outcomes of each day of the three day event.

🔹 Two extremely important motions were passed: Delegates voted to formally adopt the All-Party Parliamentary Group (APPG) on British Muslims’ definition of Islamophobia and an emergency motion from the NEC to introduce mandatory antisemitism training for all elected officers was also passed.
🔹 Accounts and estimates: Delegates voted for £2k of the General Election budget to be reallocated to the postgraduate campaign and £34k from the same budget reallocated for a full time NUS Trans Officer.

🔹 Election results: After hearing some extremely passionate and inspirational candidate speeches, delegates voted for their next NUS President and four Vice Presidents who will take up post on 1 July:
NUS' new President will be Zamzam Ibrahim who said, "I am immensely proud and humbled to have been elected as the next National President of NUS. Education is a transformative experience for millions in the UK and it is now time to make sure everyone is able to access that promise. There are many challenges ahead, but together we will meet them and revitalise our Union".
The new Vice Presidents will be...
Vice President, Higher Education - Claire Sosienski Smith
Vice President, Further Education - Juliana Noor
Vice President, Welfare - Eva Crossnan Jory (re-elected)
Vice President, Union Development - Erica Ramos

🔹 After a five hour debate, delegates passed the NUS' Reform Motion with amendments passed by a clear majority.
🔹 NUS will support reproductive justice and the NUS-USI 'Trust Us' campaign 🔹 All 19 of the Welfare Motions and 12 amendments were heard and passed at Conference this year

🔹 As part of Motion 403 - Brexit, Conference voted to continue campaigning for The People's Vote, working with For our Future's Sake (FFS) support migrant rights and non-UK students, and to extend Freedom of Movement  🔹 Delegates joined together for a photo to show their support and solidarity for the Trust Us campaign calling for the decriminalisation of abortion across the UK.  Conference also passed Motion 407 to support the Northern Ireland equal marriage campaign: Love Equality

Would you like to go to the conference next year? Drop me a line at tim.fry@weston.ac.uk